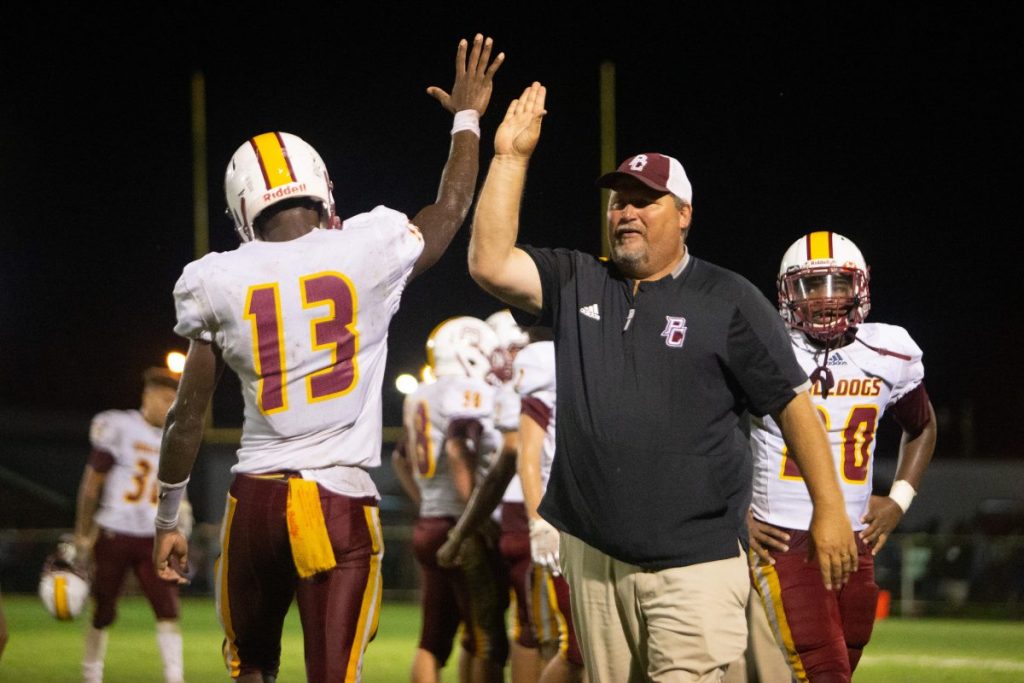 Coach Craig Cluff high fives running back Paul James after the senior pushed the Bulldogs to a 22-0 lead over Richton in the season opener for both teams.
Photo by Brad Crowe – Dispatch Staff

Perry Central blew open a tight game with two third quarter touchdowns and pulled away for a 22-6 win at Richton on Friday in the season opener for both teams.

Both teams had opportunities in the first two quarters, but mistakes and penalties kept either squad from finding the endzone. The Bulldogs turned things up, however, in the third quarter.  Senior Jamareon Gill put Perry Central on the board with an 11-yard run with 8:18 left on the third quarter clock and Ty Sumrall pushed the score to 8-0 with a strong run on the 2-point-conversion.

Sumrall stretched the lead on the Bulldogs’ next possession with an 8-yard TD run. Senior Paul James found the end zone on the 2-point try to take the lead to 16-0 with 3:32 left in the third quarter

Richton found a way to end on a high note when senior quarterback Avery Carter found classmate Caleb Overstreet in the end zone on a 40-plus TD strike as time expired. The 2-point-conversion came up just short, but the Rebels closed the final margin to 22-6.

Both teams will be at home next week for the second game of the season. Richton will host the Pisgah Dragons while Perry Central will take on Enterprise-Clarke in a battle of the Bulldogs in New Augusta.

See a more detailed report in this coming week’s edition of The Dispatch.

Rebels have tough task ahead, but excited to be competing in the postseason