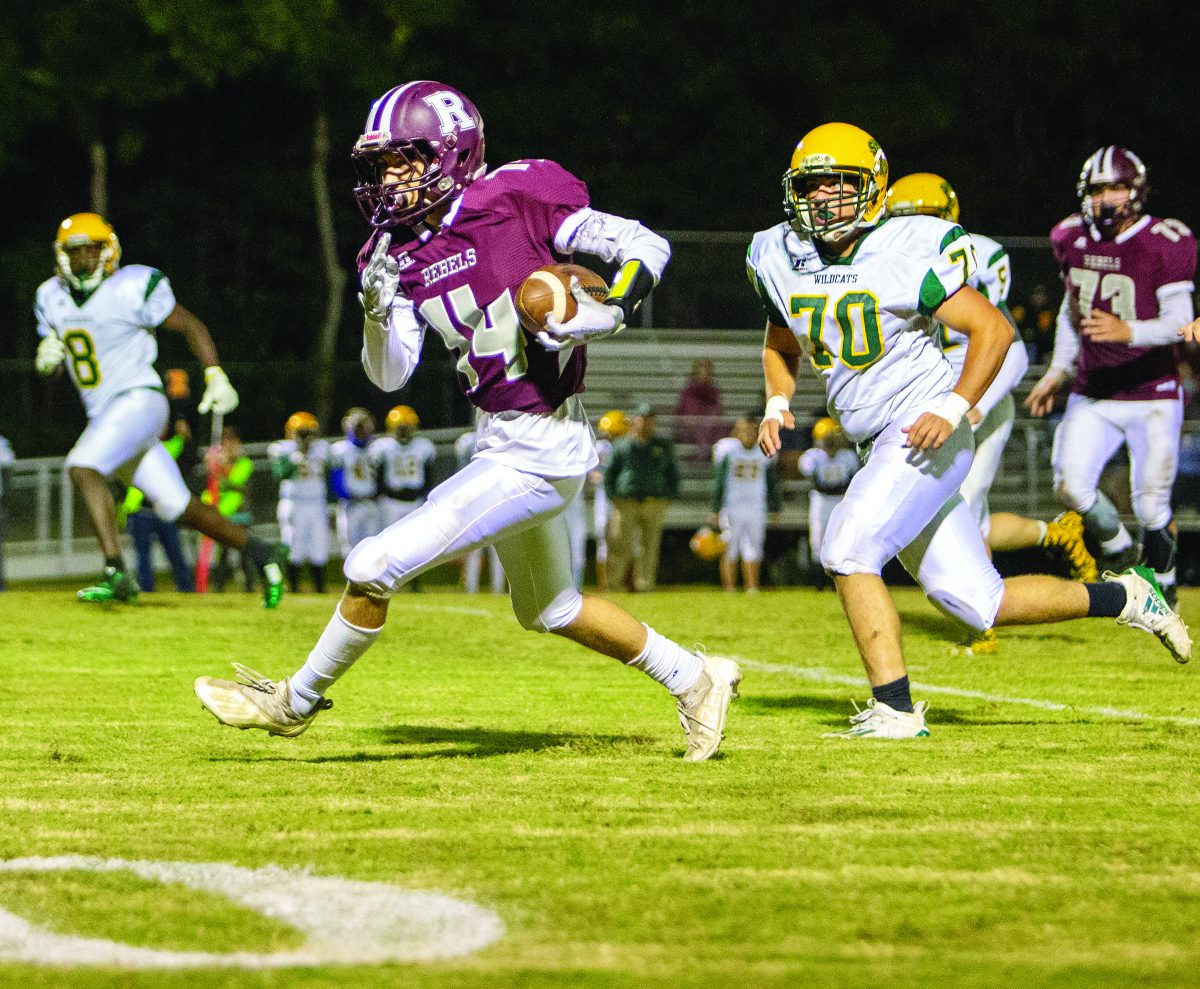 Richton junior receiver Chas McIlwain is shown picking up a big gain in the win over Salem. McIlwain was playing in the place of an injured teammate and made the absolute most of his opportunity against the Wildcats.
Photo by Brad Crowe – Dispatch Staff

_______________
By BRAD CROWE
Dispatch Staff
__________
The 2021 season has presented a number of challenges for the Richton Rebels, whose new-look region contains several juggernaut Class 1A football programs. Head coach Stephen Rice, however, has been battling an even greater challenge off the field in the form of oral cancer. Nevertheless, both Rice and the Rebels will be back on the field Friday night for a playoff game, in celebration of the journeys they’ve taken together and the obstacles they’ve overcome.
“At the beginning of the season when I got the phone call, it was kind of a shock,” Rice recalled. “It’s never easy for anybody who gets that call and is told they have cancer. It’s been a challenge for me and my family.”
Rice underwent surgery in early October during which two lymph nodes were removed. Fortunately, the cancer was detected during an early stage and both margins removed were found to be cancer-free.
“We got really lucky to find it early,” Rice said. “We had a good set of doctors. The procedure went well, and it hadn’t spread to anywhere else in the body. Recovery’s been tough, but I didn’t have to do chemotherapy. So I’ve been blessed, and I’m glad to be back and getting back into the swing of things.”
As many coaches and educators have the selfless habit of doing, Rice said he used his challenge as an opportunity to extend a valuable lesson to his players.
“We talk all the time about how you face adversity in life with different challenges and struggles,” Rice said. “And this has been one of those. One of those things where you just have to roll with the punches and count your blessings.”
Although he might not have been coaching during the Rebels’ past few games, Rice was never very far from his team. He was still in attendance watching from afar, which he said was a new perspective for him after two decades of working under Friday night lights.
“That was the first time in 20 years that I’ve watched a game as a spectator of a team that I’ve coached,” Rice said. “It was an interesting perspective that maybe allowed me to see some things that you wouldn’t normally notice from the sidelines.
And the Rebels gave him quite the show, winning four of the final five games on their regular-season schedule, including last Friday’s 44-0 shutout over Salem that punched their tickets to the playoffs as the No. 4 seed in Region 4-1A. Rice praised both the effort of his players and the work of his coaching staff for the team’s success, which provided him the opportunity to return to the sidelines this Friday for the Rebels’ first-round playoff game.
“I saw a lot of kids step up and do a great job during that time,” Rice said. “And the coaching staff with Coach Roberts, Coach Thompson, Coach Kitchens and even Coach Palmer who came over from the baseball program to help. Just seeing everyone step up to keep things going in a positive direction really made me more appreciative of all these people I’m blessed to work with.”
For Rice, this point in his journey will involve checkup appointments over the next two years to monitor his recovery. For the Rebels, it involves a trip to Columbus to take on the Region 3-1A champion West Lowndes Panthers. The task won’t be easy, but as Rice reminds his team, it isn’t the first challenge they’ve overcome and it certainly won’t be the last.
“They’re a great team with a lot of talented athletes that they like to move around and use in different ways,” Rice said. “But I think we’re used to having that underdog mentality and making those long road trips for tough games. We play in a region with the defending 1A and 2A champions, and these kids have proven they can go toe-to-toe with some really good ball teams.
“All in all, I just feel blessed to be back with the team, and we all feel blessed to have another chance to go out and compete together. We’re looking forward to the challenge, and we’ll see what happens.”